Strange poem this…inspired from the time our garden backed onto a railway line. I don’t know why the subject matter had to be so harrowing (not my usual style)…a dying man’s attempt to speed up his demise. A poem of two halves rhythmically…the train’s approach and its enforced halt. 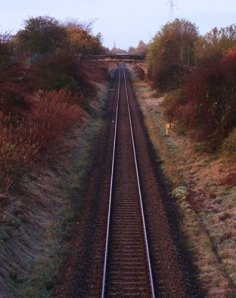 THE END OF THE LINE

Beeching the axeman; I was ‘Disgusted’

Even Joe Musso; he ran them right;

Tick-bloody-tock, all day and night.

“Give them up, Billy.” What is the point?

Is this her now, a happy release?

Iron on iron. The banshee’s yell.

On a rusting line, iced from use,

Nearer and nearer my God to thee.

That once I kissed and not in a dream

With only the hope that I see her again.

But the banshee screams and now she is gone;

And God, is it finished? From over the edge

Voices are blurring, then blaring; such pain

They think he’s alive but I’ll be the judge!

One thought on “THE END OF THE LINE”