Some 250 years ago, Oliver Goldsmith wrote The Deserted Village. It was only thirty years ago, I was given Goldsmith’s poem to study. Back then it seemed a veritable yawnfest, as I wasn’t much in to poetry. Recent conversations with my wife about how many old people move into villages in the area while in good health (often after retirement) and get ‘involved’ in village life, an involvement that often cuts off the rejuvenation of the village by natural progression. Very often they spend their final years being trapped in their homes, a long way from their family and waiting only for the arrival of their necessary carer.

As a bus driver I also see what is happening to these villages, how they are becoming devoid of life due to the lack of any new young families being able to afford to live there. There needs to be more affordable housing in these villages…sadly the defence of the house price in these places is all too powerful. It is unlikely to happen.

I recalled Goldsmith’s poem being about the deserted villages arising from the enclosure of land back in the 18th century, whereby the land that the small tenant farmers had once used to be self-sufficient was forced from them by means of rent rises and an ability to compete with the much larger farms created by the landowners. The result was that people left the country villages to seek their fortunes in the towns…hence Goldsmith’s deserted village.

I constructed the poem to the same rhythm and in the same rhyme scheme as Goldsmith (AA,BB,CC…) which I found much harder than the AB, CB that I use most often in verse. The poem is devoid of any humour which is also quite unlike most of the poetry I write. 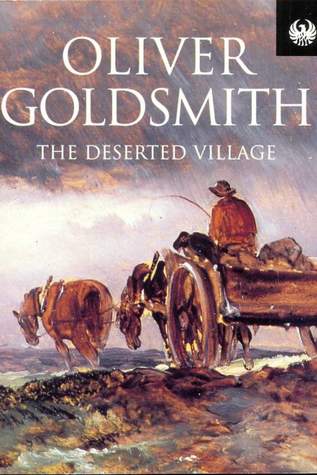 “Ye friends to truth, ye statesman who survey
The rich man’s joys encrease, the poor’s decay,
‘Tis yours to judge, how wide the limits stand
Between a splendid and a happy land.”
(The Deserted Village, Oliver Goldsmith, 1770)

As she gazes out from the mundic dormer,
Light from the weak sun does little to warm her.
Fixed in the amber light of an auburn sky,
She watches a magpie, the sole passer-by.
Her being flutters in the cobwebbed corner;
The desiccate remains of village fauna
Stuffed in a bell jar relieved of her thunder;
Skins of her past lives lay sloughed all around her.
Each delicate feature though goldsmith-fashioned
Recalls the days when she was so impassioned.
Those halcyon times when first they arrived here
Freshly retired but with intentions made clear
The village was perfect to start life anew
Plans made and submitted, put on public view.
Enclosure was needed; involvement was key;
You stood for preservative with a big P.
Back then, the power couple, wired to the mains.
Charging yourselves to be new blood in the veins,
Ousting the locals, you sensed lacked your vision;
Their ‘dreckly-based’ thinking earned your derision.
Pushing yourself ‘til you stood at the vanguard;
Eager to be seen as setting the standard;
You badger best and excel at the nitpick,
Primed for the task of preserving in aspic.
A twin tour de force with matching ambitions;
Tilting at windmills with rolled-up petitions.
Then when your John passed, you didn’t stop the fight;
Took on night-school classes and built a website.
Look through your window, see that you’ve merited
The deserted village now inherited.
The post office gone without much palaver,
Lazarus-risen as funeral parlour.
Now a chapel of rest for the village dead
By the cast-iron casket marked out in red.
The inconvenience of losing the store,
(For petitions and posters who could want more?)
It’s closure for you has been a disaster;
Handy for things you’d forgotten at Asda.
The Red Lion is now The Bengal Tiger;
Real ale’s been replaced by Indian lager.
No more Sunday roast or steak and kidney pud;
Gone are the days when you could eat spicy food.
The church is only active one week in four;
Society weddings now the only draw.
A grave-hopper squats by a lichen-kissed stone
The plots are untended, the mourners have flown.
The empty mansions that were bought on a whim
By flush city folk for a dodgy tax skim.
Their blind soulless windows of all life bereft
Are cold comfort cancer community theft.
The old double-decker’s engine and braking,
Ever the cause of you from slumber waking,
No longer reverses in the village square
Now that you require it, it’s no longer there.
The expensive taxis you now have to get
For doctors and nurses, who have to be met.
The ferryman to get you over the Styx
Comes with a number treble six treble six.
The life blood congealed now in varicose veins;
The children are gone but the school still remains.
Snapped up by men with ideas from afar;
Planning permission for a luxury spa.
Its school, its shop, its pub and its life retreats
Until only ghosts walk about on the streets
Pavements mossed over as there’s no need to walk,
Each pothole becomes home to a ragwort stalk.
Now the only young folk you’re likely to see
Turn up in dull cars with passcode for a key.
Watch their identity and names evanesce…
The carers and cleaners who wipe up the mess.
Where is the new blood, that vital transfusion?
Applied tourniquet maintained the seclusion.
Dialysis blocked on a daily basis
With all and anything to keep the stasis.
Now you can’t get the staff, they’ve all moved away.
You can’t because you didn’t want them to stay.
Those affordable homes you fought to repel
Because you thought they may house the ne’er-do-well.
All this has happened during your lifetime here,
Now you rage inside like some helpless Queen Lear.
What advice would you give to new arrivals
With their airy dreams of village revivals?
“Enjoy the view, the peace and life idyllic,
Don’t pass up the chance to be altruistic?
And think on this before you’re well past your prime:
Remember to move back to town in good time
Where there’s life, help and friendship all close at hand
Always a pasty and both Pound- and Iceland.
Lest you end up rattling in your sealed-up vault;
Your head full of doubt…was it really your fault?”
As your garden returns itself to the wild;
The gard’ner’s stopped coming. It’s not worth her while.
Your life spent in two rooms to keep the bills low,
The staircase redundant except for…you know.
The deserted village is yours now to own;
What point to a lock-in if you’re all alone?
Another day ends with its cloying curfew
Of that amber light closing all around you.
In the distance she can make out the village
Over the stench of winter’s rotting tillage.
No industry thrives, nor stirs any creature…
The post box is the only constant feature.

4 thoughts on “THE DESERTED VILLAGE, CORNWALL 2020”