Thursday 24th March 2016, I was driving one of the little buses from Mousehole to Penzance and filled the bus up at the stop at Newlyn Bridge. It was a pleasant day but people got on with things on their mind like any other day. As I set off to leave I noticed that Jelbert’s Ice Cream shop had opened for business (it closes for the winter months) and already there was a queue forming outside. “Yay! Jelbert’s is open!” I shouted and the passengers (with the exception of a few tourists who wondered what was going on….’do Cornish bus drivers actually engage with their passengers?’) all forgot what they were thinking about and cheered along with me. That was it….the end of winter!

This poem is all about CHOICE…exemplified by this piece of classic cinema footage from the film DIRTY HARRY.

The sigh of relief at winter’s end

Is a given in temperate climes.

As we keenly count the harbingers –

Ones that signify sunnier times.

The confirmation that winter’s done

Is a story the flowers foretell;

But long before the May Horns are blown

There’s one marker we all know so well.

No cuckoo this with its trademark song,

No bluebell swathe or gambolling lambs –

It’s not a pastoral scene per se.

If nightingales sang in Regent Square

My heart couldn’t feel any gladder.

It’s harder to spot than an adder.

The shop itself does its best to hide;

Pays no homage to bygone summers

Or decks itself out in candy stripes;

It sort of resembles…a plumber’s… 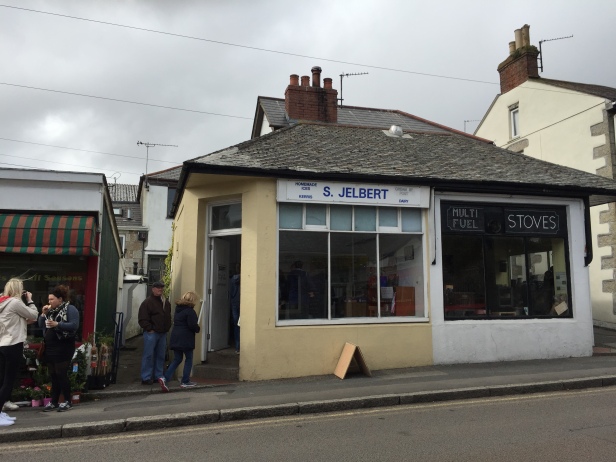 So if tourists can’t find it, well tough!

Less for them means it leaves us with more.

The only thing that we can’t disguise

Is the queue coming out of the door.

And what of the product itself then?

Which seems to be doing quite nicely

Without need of a marketing team.

Would dive frothing from their glassy towers;

Without need of their well-paid man hours.

No expense is spent on the signage –

Low overheads reflect in the price.

A steady hand with a black marker

On re-cycled cardboard will suffice. 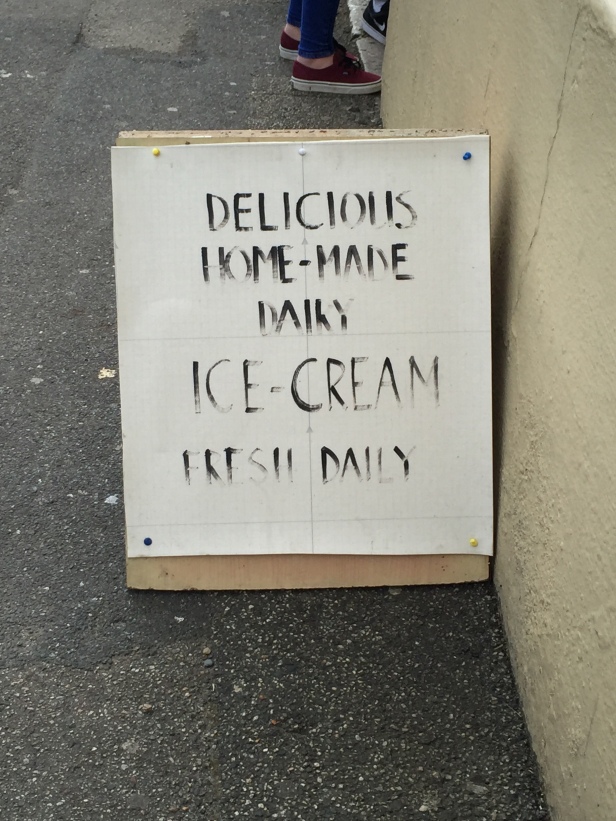 A nod’s as good as a wink, nudge, nudge.

Everything’s left to word of mouth

And the mouth is the ultimate judge.

No choice other than how much you want.

It’s the only decision to make.

Yes you can add the odd extra

It’s a lesson in understatement

Constant as the firmament twinkles.

The burden of choice removed for all

They don’t even offer you sprinkles.

Let me take you to another place

Where every flavour is at hand.

You’ve got the freedom of choice you’re craving

Your mind does its best to decide from

The multiple flavours of ices.

The upshot is that you find yourself

In a state of choice paralysis.

Equally between two bales of grass.

Starved because you can’t make up your mind.

How could a donkey be such an ass?

Maybe that Henry Ford knew something

When he produced those first Model Ts.

Any colour…just as long as it’s black;

The world’s not ready for novelties.

So when at last you’ve made up your mind

And plumped for the Chocolate Brownie;

The doubts creep in about Mint Choc Chip

Or the Orange and Marscapone.

Then you get a lick off someone else

And wish that was the one you’d chosen.

As you ogle someone’s Eton Mess.

How could provision of such a range

Leave you feeling in need of redress?

You were given choice and you blew it

To pick the best was clearly your aim.

If failure is of your own making

Then you have nobody else to blame.

To maximise our experience

We research and review to excess

But expectations are so built up

It seems it was all so much better

Before our world was categorised.

We still had the opportunity

To find ourselves pleasantly surprised.

It may give cause for celebration

Perhaps the secret to happiness

Is to lower our expectations.

So when tourists spy a queue that snakes

Out from an unremarkable shop…

Curiosity piqued, so much so

That it brings them to an unplanned stop

“This must be something special” they say,

“What on earth could be the attraction?”

They’re in, they’re out; no need to do more

Than complete a simple transaction.

They bask in that glow of nostalgia.

Hooray for the wonder of Jelberts

Their expectations have all been met.

But for me their secret of success

Comes from NOT producing more lines.

Imagine how long that queue would be

If we all had to make up our minds.

The appropriately name ONLY ONE FLAVOUR by TV SMITH

A video that inspired my thoughts about Jelberts by Prof. Barry Schwartz…quite funny and worth a watch…

“Freedom of Choice is what you got!

Freedom from Choice is what you want!”