Let’s get one thing straight…the lovely people at Isle of Scilly Travel advised us not to travel on the Scillonian that fateful morning. They told us we might be sick and we most definitely were. The Isles of Scilly are beautiful and I would recommend that they are well worth a visit…but if you’re going by ferry (known locally as The Sick Bucket)…choose your day wisely. The following poem is about two people who didn’t heed their warning. 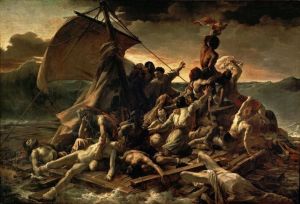 THE RAFT OF MEDUSA by Theodore GERICAULT (Louvre Museum, Paris)

The RMV Scillonian III is colloquially known by the Penzance locals as ‘The Sickbucket’ (or The Big White Stomach Pump) for the following reasons. Due to the shallow nature of the two harbours that host the service (Penzance and Hugh Town on the island of St Mary’s), the boat is more or less flat-bottomed. The upshot of this is that rather than cutting through the waves it skims across them like a stone; which can be quite an endurance as the ship passes Lands End, where a number of tidal currents meet. The passenger ferry to The Isles of Scilly is not the only way to visit the islands that lie about twenty-odd miles off the Cornish mainland…you can also fly from Lands End airport in a small aircraft. Up to a couple of years ago you could fly over in a Sikorski helicopter but the heliport is now a giant Sainsburys and the service no longer exists.  Having lived in the Penzance area for almost ten years now, our failure to visit the islands seemed somewhat of an oversight. It was decided we would travel on a particular day and the IOS Travel people did their best to talk us (and other people) out of going on a day trip; which seeing this is the raison d’etre of their business…gave me cause to think perhaps we shouldn’t go today…we can go anyday…but, filled with the maritime spirit of our ancestors we went that day!

At the Isles of Scilly Travel shop,

We were given a bit of a shock;

When their folk advised us not go –

We told them, “We’re from maritime stock.”

“It’s gonna get rough out there”, they said.

“Before it’s better, it’ll get worse.”

So we’ve only got ourselves to blame

Or were they psyching us in reverse?

‘Course we’re still in the calm of the Bay.

But our meeting with the Atlantic

Caused a sea change to darken our day.

The clues were all there – easy wipe seats,

At this point I’m calm, but affected.

The recall is my wife’s and not mine;

There’s a mounting concern for my heart.

And my skin took on a greenish hue;

Eau-de-Nil on the Homebase paint chart.

That maritime stock is now laughing.

Yes, I know, just who was I fooling?

Rolled his eyes and sailed back to Newlyn.

Waves of nausea washed over me

Like the waves of no sea from my past.

It may have been my trigger stomach

That was cause of all the upheaval.

It could have been me who urged them to

A more than necessary evil.

Primed to launch that initial broadside,

I did my utmost best to chuck it

Into a pre-prepared Sainsb’rys bag

But I missed on the old Sick Bucket.

So what did I care from that point on

If I’d breached the others’ defences?

I battened down hatches, closed my eyes

Made the most of my other senses.

Nascent fog horns cried out from their nests

As a baby sobbed uncertain tears

At how he felt and the reticence

Of his parents to comfort his fears.

A cacophony of wretches retched;

Their eyes squeezing out of their orbits.

Piteous wails and the gnashing of teeth

On those high-content ginger biscuits.

As people lay abject and fainting

And clung to dear lives in a scene that

Synchronised sickbags persist as if

We are all into this summer’s craze.

You’ll have heaps of fun with Mal de mer!

And just think of the money you’ll save.

As I float in and out of my wits.

How can the word ‘sick’ mean ‘great’ these days?

The ship now filled with that acrid stench;

That familiar reek of vomit.

The spent force silence endures until

I’m not one for voicing shortcomings

But this time I really must insist –

Had Dante sailed on The Scillonian

A Tenth Circle of Hell would exist.

Arrival at Hugh Town did little

To becalm the churn in my nethers.

As blinking and bleached I made footfall

In my pair of spew-splattered trousers.

A half-hearted meal was partaken

Before we could set off and explore.

Unwinding was out of the question

As we’re back on that vessel at four.

The sun burnt away our misgivings

As the isle bid us stay ever long.

We passed on the lotus leaf pasties

And the CD of her siren song.

Caressed by those palm-waving zephyrs;

So familiar; yet so diff’rent

How could we not love…it’s just Scilly!

The sail home was hot, blue and balmy.

It was more like a cruise on The Med.

Such a change from wishing myself dead.

So yes, I’ll go back to The Scillies.

I’ll quote Latin to sum up our trip 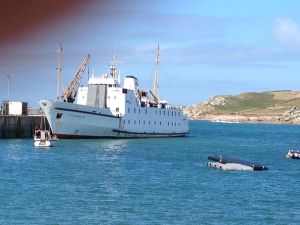